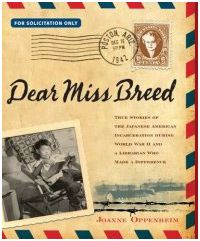 Clara Breed was a children’s librarian in San Diego during WWII.  When her young Japanese-American patrons were interned at Santa Anita Racetrack in 1942, she did not turn her back on them. She wrote all her Japanese American patrons, and sent them books along with other items that they and their families needed.  A number of Japanese American artists sent Miss Breed art objects in thanks for the art supplies she sent them.  Author Joanne Oppenheim discovered Miss Breed when she was attempting to locate a Japanese- American schoolmate.  She read the story of this courageous librarian on the website of The National Japanese-American Museum at The Clara Breed Collection . This page is a finding aid for the digitized versions of letters that Clara Breed received from the interned children and young adults that she had served as a librarian.  Oppenheim hoped that a book about a librarian who assisted Japanese Americans during WWII would help to prevent the United States from ever interning American citizens again.

A letter to Miss Breed from Fusa Tsumagari dated August 2, 1942 described the riot at Santa Anita. I was interested to learn that it was precipitated by a search led by an abusive guard who was Korean.  It occurs to me that this guard was probably taking out a resentment against Japan on Japanese-Americans.  I mentioned WWII Japanese atrocities against Koreans in my June post “Japanese Minorities: Not Enough Respect”, but there is a much longer history of antagonism between Japan and Korea.  See the Wikipedia article about Japan’s colonization of Korea, Korea Under Japanese Rule .  I consider this an explanation for this guard’s behavior, not a justification.  Money was stolen from internees during the search.  They had a right to be angry about this theft.

After the riot, the San Diego Japanese Americans were transferred to Poston III, one of the camps in Poston, Arizona.  Tetsuzo Hirasaki  wrote to Miss Breed that the older internees were on a sort of vacation because they got to go fishing at Poston.  I saw a recent documentary called “The Manzanar Fishing Club” in which Japanese Americans interned at Manzanar described how they risked their lives to go fishing.  Find out more about this film at  The Manzanar Fishing Club Official Website . Apparently, conditions were different when the San Diegans first arrived at Poston.  The camp wasn’t surrounded by barbed wire from August to November 1942 which facilitated fishing until a barbed wire fence was erected.   After they were fenced in, fishing would no longer have been a simple leisure activity.

Poston was scarcely idyllic.  It was a very dry climate, and the San Diegans were unaccustomed to the heat of Arizona.  There was also a polio epidemic.  Richard Watanabe, one of Miss Breed’s correspondents, caught polio.  Oppenheim reports that he had a limp for the rest of his life.   He may also have suffered from post-polio syndrome.  See Post Polio Syndrome Fact Sheet for more information.

When the military age male Japanese Americans at Poston III were asked to swear loyalty to the United States and fight in WWII, not one of  Miss Breed’s male correspondents who were of age to serve declined to do so.  I feel that Clara Breed’s supportiveness  encouraged their belief in America, and that there would be a place for them in the U.S. after the war.  Even though they had been wronged by their country, Miss Breed gave them hope.  She wrote an article in support of Japanese Americans that was published in The Horn Book in July of 1943 called “Americans With The Wrong Ancestors” and sent copies to Poston III.  The Horn Book is a publication for librarians dealing with children’s literature.  Clara Breed got many favorable reactions from librarians in response to that article.

This book deals with what happened to a number of Miss Breed’s correspondents after the war.  I thought it noteworthy that Katherine Tasaki wanted to be a librarian.  Unfortunately, there were no scholarships available for her. So with Miss Breed’s help she got a non-professional job at Chula Vista Library.  Later she and her husband Ben Sagawa formed the Japanese American Historical Society of San Diego.

In an afterword Snowden Becker, who scanned the letters of Miss Breed’s correspondents for the National Japanese  American Museum while she was still in library school, wrote feelingly about Clara Breed as a role model.  I too was inspired by Miss Breed.  When I returned this book to the library, I went to the reference desk and told the librarian that Dear Miss Breed was one of the best books I’d ever read.

Recommended for librarians, library students and students of history.