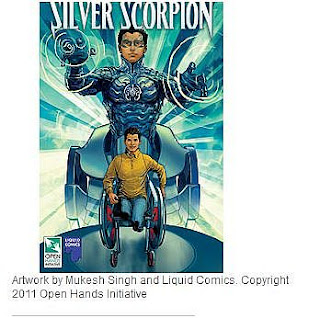 The history of the creation of  Silver Scorpion is an amazing one. The Open Hands Initiative  sponsored a Youth Ability Summit for American and Syrian differently abled teenagers which took place in Damascus in 2010.   These young people created a Middle Eastern protagonist in a wheelchair who undergoes a metamorphosis into a superhero. The Open Hands Initiative partnered with the digital publisher Liquid Comics and Dynamite Entertainment to realize their vision.   For a video about the origins of this project see The Making of the Silver Scorpion Comic Book .

I was able to see the opening of Silver Scorpion in color by viewing the four part animated web series at MTV Voices  which is an excellent teaser for the graphic novel.

I was impressed with the character of Bashir, the young Syrian sculptor who becomes the Silver Scorpion.  Bashir lives with his uncle Tamim, who is a scrap metal dealer. According to the sources I consulted, Tamim in Arabic means strong, solid and impeccable.  Tamim in Hebrew is used to describe a  fully-committed spiritual relationship with God.  The character Tamim is a wise mentor for Bashir.  He provides stability through Bashir’s transformative ordeal.

The tale is a melange that included some familiar elements. The Silver Scorpion’s powers might be considered similar to the powerful Marvel mutant anti-hero, Magneto . I also recognized tropes from my old favorite, Witchblade.   Ron Marz, one of the Silver Scorpion co-authors, has written quite a bit of Witchblade  for Top Cow which is the original publisher and owner of the Witchblade  franchise.  See Top Cow’s Witchblade Page . The Witchblade is a powerful and intelligent artifact that chooses its female wielders. The historical personage Queen Zenobia  of ancient Syria is central to the Silver Scorpion origin story, but she is also part of Witchblade continuity as a previous wielder of the Witchblade. For more information see Witchblade Page From Image Comics, a former publisher of Witchblade.  If you scroll down on that page, there is a list of  Witchblade wielders that includes Queen Zenobia as Zenobia Septima which is her Latin name according to the Wikipedia article linked above.

There have been other comic book heroes who sit in wheelchairs, but have extraordinary abilities.  Marvel’s Professor X, the leader of the X-Men, is probably the most famous of them. He was born Charles Xavier and became a powerful telepath.  Another comic book hero in a wheelchair, known as Oracle , was a tremendous inspiration to a great many people. She didn’t have any superpowers, but she was a former librarian and wielded the formidable power of information.  She was born as Barbara Gordon, the daughter of Police Commissioner Gordon of Gotham City, the home of Batman, the world renowned Caped Crusader of DC Comics.  For the complex history of this DC character see The Wikipedia Article on Barbara Gordon.  Barbara Gordon continues to have adventures in the relaunched DC continuity, but Oracle is gone. I have seen her tombstone and have mourned her.  The Silver Scorpion can’t replace Oracle, but I do recognize him as a successor who can play a similarly important role.

I think that it’s the character of Sandstar that is the most original contribution of Silver Scorpion to the annals of  comic book heroes.  Sandstar  emerges from the desert.  She seems to be inspired by Arabian legends of spirits such as the Jinn.  They are usually seen as evil, but I located An Islamic Page on the Jinn which states that Allah created the Jinn , and that when they are righteous they will be rewarded.  Within  Silver Scorpion’s narrative, Sandstar represents the urge of Islamic women to educate themselves and defend their rights.  She can become a role model in Syria and other Islamic nations.  My only complaint about this character is that she is inconsistently called Sandstorm later in the storyline.  So I am uncertain about whether her official name is Sandstar or Sandstorm.

What happens when our heroes are in wheelchairs, or they are women who refuse to be marginalized?  I hope that what happens as a result of this graphic novel is positive change like the transformation of Bashir into the Silver Scorpion.

Audience: The Silver Scorpion is suitable for ages 10 and up.